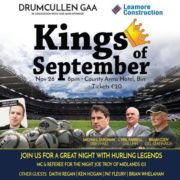 The club is organising a gala night on 26th November featuring Brian Cody, Cyril Farrell and Michael Duignan with full supporting cast. Tickets at €20 are available in Oonaghs shop, Ramblers Rest, the County Arms or from Toni Ryan (085-1746665) and committee members. Early indications are of a strong demand and we look forward to a great evening’s entertainment so don’t leave it late to secure a place. Proceeds go towards our recently launched club development plan which was circulated to every house in the parish.

Our Minor B semi-final is fixed for Saturday November 5th versus CRC Gaels in Birr at 2pm.

We extend our condolences to the family and friends of the late Sr. Agnes (Claire) Fleury formerly of Killyon.

We host two important games on Sunday evening at 6 and 7.30. All committee and field rota members are asked to be in attendance from 5pm.

Our annual golf classic takes place on Friday 22nd July. Teams of four at €200 including golf, barbecue, steak dinner and maybe prizes. Anyone wishing to enter a team or sponsor a Tee box should contact Toni (085-1746665) or Dermot (087-6887076) or any committee member. It promises to be another great day and the rain will be gone by then!!

We wish Pauric Guinan, John Murray, their team-mates and management the best of luck on
Wednesday evening in Tullamore versus Dublin. The club will be bringing children up to under 12 to the game by coach. Parents are reminded that entry is free for all Under 16’s and adult admission is €10

We host Division 2 League semi-Final on Sunday morning at 11.30 between Coolderry and Shamrocks. Team A, Toni Ryan, Liam Guinan, Declan Murray, Fergal Dooley and Paul Mannion are on rota and need to be in position for 10.30.

Our annual golf classic takes place this year on 22 nd July at Birr Golf Club. Anyone interested in entering a team or sponsoring tee boxes should contact Dermot Horan (087 688 7076) or Toni Ryan (085 1746 665). Team entry is €200 and includes golf, barbecue, steak dinner and maybe even prizes!! We look forward to another great day.

Numbers drawn Saturday 2nd July were 4,5,6 & 28. Margaret Dooley won the promoters prize and Mick Breslin c/o Peadar Nugent was the sole match three winner of €150. This week’s jackpot is €10,850 and Team 1 are on rota.

This was an entertaining game played at Rath on Friday last. A wholehearted performance by the home team established a half-time lead of 0-9 to 0-5 and midway through the second half the lead held firm at 0-10 to 0-6. There followed a power failure which saw Coolderry take control following a well worked goal and they went on to dominate the remainder of the game. Despite this setback the team should look forward with confidence to the remainder of the championship and we wish them well.

This game played in Clareen on Sunday evening in perfect conditions ebbed and flowed during an enjoyable first half before SKD took control and while the visitors responded bravely the result was never in doubt.

Our annual golf classic will take place again this year at Birr golf club on 22nd July. Anyone interested in entering a team or offering sponsorship should contact Dermot Horan or Toni Ryan. This has proven to be a most enjoyable and well organised event and hopefully this year will be no different.

Well done to Offaly’s Under 21 hurlers on their victory in Carlow on Thursday last and we wish them well in the final against Dublin on 6th July in Tullamore. We also wish our senior hurlers the best of luck on their trip to Wexford on Saturday next. These teams are deserving of our support.

Numbers drawn Saturday 25th June were 3, 19, 20 & 21. There was no jackpot winner and Michelle Carroll c/o Rody Carroll was the sole match three winner of €150. Peter Lyons won the promoters prize. This week’s jackpot is €10,700 and your continued support is much appreciated.

We extend our sympathy to the Guinan, Clonbrone, Abbott, Clareen and Kearney, Rahan families on their recent bereavements

Drumcullen/Seir Kieran host Coolderry in the first round of the Minor Hurling Championship on Friday evening at 7.30. Unfortunately, due to broken finger sustained in Offaly’s fine win in the U17 Celtic league final, we will be without Ciaran Guinan and we wish him a speedy recovery. On Sunday evening Seir Kieran/ Drumcullen play Cuchulainn Gaels in Clareen at 6pm in the U16 hurling championship.

We are due to host two league semi-finals on Saturday evening and assistance is required from 5pm to ensure smooth running of these fixtures. Your support would be appreciated.

We wish Pauric Guinan, John Murray, their team-mates and management the best of luck in their game against Carlow in Dr. Cullen park on Thursday evening

Our annual golf classic will take place again this year at Birr golf club on 22nd July. Anyone interested in entering a team or offering sponsorship should contact Dermot Horan or Toni Ryan. This has proven to be a most enjoyable and well organised event and hopefully this year will be no different.

We extend our deepest sympathy to the family and friends of the late: Peter O’Brien, Knockbarron, who was a vital member of our championship winning teams of the 50’s and Madge Grogan (nee Fleury) Clareen. Ar Dheis De go raibh siad.

Saturday last saw a feast of hurling and food as we welcomed Fenagh-Killmeedy from Limerick. We had visited them last Autumn and were royally received and we were keen to make their return visit a memorable one. We had three games at U8, 10 &amp; 12 all ably refereed by Kieran Dooley whose attendance we appreciate. Following the games there was a barbecue for more than two-hundred hungry souls and we are most grateful to those who supplied, prepared and distributed food on the day. The weather also co-operated fully and a great day was had by all.

Best of luck to Pauric Guinan and the Offaly Senior Hurlers and management when they take on Galway in the Leinster Semi-Final on Sunday next in Portlaoise at 3.30.

We extend our condolences to the family, relatives and friends of the late Rose Hughes, formerly of Raheenglass; Vincent Usher, Boora and Ambrose Hickey, Daingean

A half-time score of 1-9 to 0-12 gave no indication of the one-sided nature of the remainder. Two early goals by the visitors opened up a gap which would grow ever wider as the second half progressed. The opening stages were evenly contested and a smashing goal by Colm Gath with points from five players had us looking forward to a close game to the end. In perfect conditions there was an alarming collapse as we were outscored by 2-10 to 0-4.

Best of luck to Podge Guinan and his team-mates and management in their match v Laois on Sunday next at 3.30 in O’Connor Park.

We wish all those completing exams in the coming weeks the very best in their endeavours.

We extend deepest sympathy to the family, relatives and friends of the late Seamus Mulrooney, Clareen.